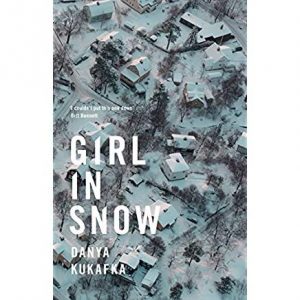 I heard Danya Kukafka interviewed on DIY MFA and immediately added ‘Girl in Snow’ to my ‘Must Reads’ list. I loved the way Danya described telling this story from three completely different points of view.

I love a good whodunnit, and enjoyed this immensely, despite it being more about the effects of the murder than the solving of the crime. One thing I found incredibly interesting was the way that the characters saw each other and those around them. Some of their views turned out to be completely at odds with who the characters really were and how they saw themselves.

Cameron adored his fellow high school student, Lucinda Hayes, and was devastated when she was found dead. Jade envied Lucinda and wanted to have her life. Russ is a police officer with marital problems and a strange history with Cameron’s absent police officer father. They are each taken on a journey of self-discovery during the murder investigation.

“You’re the dead girl’s stalker, aren’t you?”
The girl in the scratchy armchair outside Principal Barnes’s office was speaking to Cameron.
“Excuse me?”
“You’re the freshman they’re all talking about. The kid who stalked the dead girl. Right?”
Her head rested against the wall behind her chair, bored and effortless. She lived in the neighbourhood and she was always alone. Her jeans had chains hanging from the pockets. Her eyes were ringed in black; raven, greasy hair swooped over one eye, and she wore a T-shirt that sported the name of a band Cameron didn’t know. The T-shirt was cut off sloppily above her midriff, and two inches of pale stomach rolled over her waisteband even though it was winter and she was probably cold. A spattering of acne spread across her chin and forehead.
The girl raised one slanted eyebrow at Cameron. He wanted to raise one back, but every time he tried, the other went up automatically, and he didn’t want to look stupid.